What is microlensing: Vreeswijk master's thesis

The following excerpt was taken from Paul Vreeswijk's Grootonderzoekscriptie (Master's Thesis), which was submitted as a requirement for his doctoraal degree in June 1996 at the Rijksuniversiteit Groningen, in the Netherlands. As his ``Grootonderzoek Projekt'' (Master's Thesis Project), Paul helped take, reduce, and analyze data collected by the PLANET Collaboration during its pilot 1995 season searching for extra-solar planets and other anomalies in microlensing light curves.

In the past few years a huge number of papers about microlensing have appeared. Because of this, the subject of microlensing may seem to be a very new area of astronomy, but in fact the idea is rather old. In 1936 Albert Einstein himself published a one page paper in Science regarding microlensing (Einstein 1936). For him it was more or less a Gedankenexperiment: observe a certain star A on the sky and imagine another star B in the line of sight toward A. What will happen to the light coming from A? He showed that when A, B and the observer are exactly aligned, a ring-like image will be formed. When B is some small distance away from the line of sight, two images of A will be created. However, the angular separation between these images, or the diameter of the ring, is of the order of milli-arcseconds and cannot be resolved. What can be seen is the enhanced brightness of A, since the sum of the luminosity of the two images (or ring) is larger than the unamplified luminosity of the star itself. Light from star A that would have missed the earth without star B in between, is now bent by B toward the observer. Star B acts as a gravitational lens, and the effect is called microlensing. In practice the chance of observing two stars aligned within one hundredth of an arcsecond with the earth is very small, since the volume density of visible stars in the Galaxy is so small. 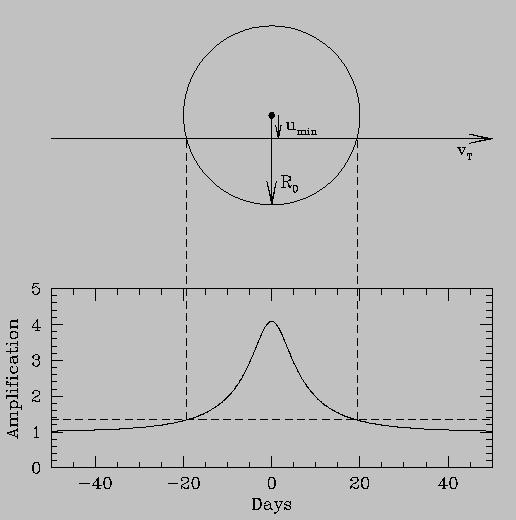 Fig 1:A theoretical light curve of a microlensing event. The lens (solid dot) can be considered to be fixed. The ring represents the distance where the amplification is 1.34 (Einstein radius). As the source is moving along the straight line its brightness is significantly changed when it is within the Einstein radius of the lens.

So this phenomenon was known for a long time in the literature, but did not have any chance of being observed until Paczynski wrote an important paper (Paczynski 1986). If one observes stars in a nearby galaxy, the chance that a Galactic star crosses within milli-arcseconds of one of those distant candles is very small. But the flat rotation curves of spiral galaxies indicate that there probably exists an enormous amount of dark matter out in the Galactic halo (Fich & Tremaine 1991; Trimble 1987). This matter could be made up of massive exotic particles, that particle physicists have not yet detected. The other main theory is that this invisible mass simply consists of baryonic compact objects, e.g. white and brown dwarfs, neutron stars and black holes. If one assumes the latter, the chance of observing a microlensing event increases significantly. The lens does not have to be a star, but can also be a small dark object. Paczynski calculated that if the dark halo of our Galaxy consists of dark objects (often called MACHOs, Massive Astrophysical Compact Halo Objects, a term invented by Kim Griest (1991)), the probability of observing a change in brightness of a star toward the Large Magellanic Cloud is roughly million to one. So if one observes a million stars in the LMC, there will probably be one among them that is significantly brightened at any given time.

This was of course a very interesting conclusion, for if the MACHO scenario is true, microlensing is a way to actually detect the dark matter that astronomers have been looking for these past decades. The observing task is enormous, because at least a million stars have to be monitored about every day, but with the new CCD technology it did not seem impossible and various groups tried to get these microlensing surveys going.

And not without success. In 1992 several teams started monitoring the Magellanic Clouds and the Galactic bulge; the latter was a sort of check on the detection efficiency. If no microlensing events would be discovered toward the Clouds, it could be because of a very low detection efficiency. Since the bulge is up when the Magellanic Clouds are down and the line of sight toward the bulge contains a lot of matter, it could do no harm to also scan some fields close to the Galactic center.

The fact that microlensing has a well-defined light curve helped the survey teams to distinguish it from a variable star, or a flare. Another such feature is the achromaticity of the amplification. In two different filters the light curve should look the same, since lensing is wavelength independent. Third, for a given star, microlensing should happen only once. We know the chance of seeing a lensing event is very small, so it is virtually impossible for a star to be lensed twice within a short period of time. Thus as soon as another bump is visible some time before or after the time of peak amplification, it is probably a variable.

back to the PLANET Homepage